One mission in israel

We are blessed by all the Lord is doing, and we are excited to partner as one church from the area on this initiative. Ultimately, in all things, we are one church made-up of many congregations on One Mission.

Opportunities to Impact the Lives of Jews

One Mission in partnership with The Jewish Agency helps Jews "make Aliyah" – return to the Holy Land as prophesied by Moses, Isaiah, Jeremiah, and Ezekiel, and establish themselves permanently as immigrants to Israel.

We invite you to get involved and join us by becoming a Christian Friend of The Jewish Agency as together we continue to help write this historic story. 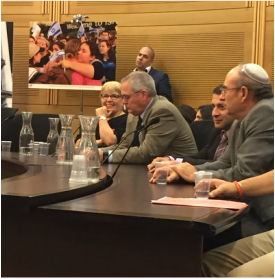 The Knesset Committee for Immigration, Absorption and Diaspora Affairs held a meeting on November 8, 2016 to mark the first "Aliyah Day" in honor of new immigrants to Israel (olim). The event was attended by new immigrants, immigration activists, Knesset Members, senior officials from the Jewish Agency, the Ministry of Aliyah and Immigration Absorption, and members of the Christian Friends of The Jewish Agency including Dvora Ganani, Hank & Marilyn Marion of One Mission and Rebecca Chavez of Deborah the Brave Ministries.

Hank Marion was given the opportunity to address the Knesset on behalf of the Christian Friends of The Jewish Agency from all over the world saying,
"As you know, not all Christians have acted like friends to Israel and the Jewish people. And for that I am very sorry. God told Abraham that He would make him a large family and He would do it from many nations. I am not a Jew but I am one of those from many nations. In Isaiah 60 it says foreigners will rebuild your walls and kings will join you in your work. 4,360 years ago God saved the animals and humanity by putting them in an ark built by Noah. Today, the work of aliyah and absorption will preserve the Jews bringing them into the ark of Israel. And just as Boaz when he took Ruth, saved an inheritance, Aliyah will preserve the inheritance of God. In Isaiah 19 it says Israel is God's inheritance. In Joel 3 God says He will gather His inheritance from all over the world - those who have been scattered. So we work beside you - we work with you - we work with you in love. Not as Christians first, but as family according to the promise of God to Abraham. Let me say again, not all Christians have acted as friends but there are tens of millions who pray for you everyday - who love you. They do not know how to bless Israel, but we are telling them how. 'Todah Robah! (Thank You Much)'"

It was truly an honor to be part of this historic event as God continues to open unique doors of opportunity for the Christian Friends of The Jewish Agency. Thank you for your prayers.